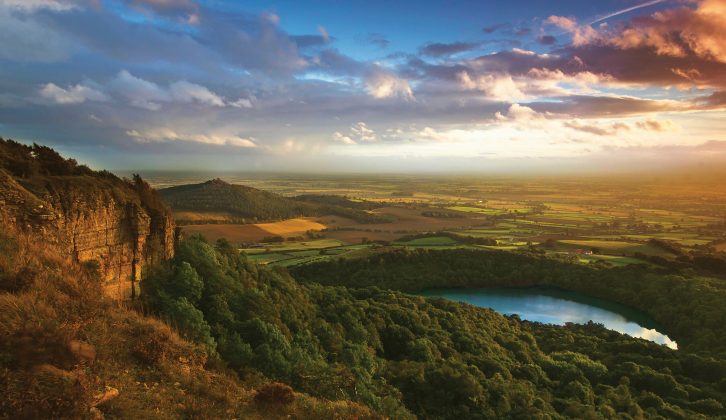 Bryony Symes and Clare Kelly take in the sights in Bath Read our portable barbecue reviews to find the best of 12

Magnificent Cheddar Gorge is the dramatic backdrop for our cover stars this month, the new 2016 Bailey Pegasus Palermo and the new Kia Sorento. As Autumn approaches, the wind of change is in the air and in our new September issue of Practical Caravan we can reveal lots more news from the 2016 caravan launches.

We’re excited to bring you 21 pages of previews of new 2016 tourers, shining our spotlight on Bailey Caravans, Coachman Caravans, The Explorer Group and The Swift Group. “2016 is shaping up nicely,” says Test Editor Mike Le Caplain, adding that there’s “an interesting and eclectic mix of caravans promising to make the Lawns Caravan Extravaganza and NEC Show all the more fascinating.”

The new 2016 caravan reviews in this issue include the five-berth Bailey Pegasus Palermo featured on the magazine’s front cover. It’s the only twin-axle van in the seven-strong Pegasus range for 2016 and Alastair Clements reviews this spacious newcomer.

Mike Le Caplain brings us his new 2016 Swift Conqueror 565 review and reveals the reasons for a seismic shift in Swift’s the entire caravan line-up. The Conqueror range has had a sleek and stylish makeover and gone very upmarket, as you’ll see in our review.

Coachman has had a reputation for playing safe in the past, but its newest model is impressive and very different! In our September issue Mike Le Caplain gets inside the Coachman Pastiche 470, which he thinks may be the most radical of 2016’s launches.

The Venus range got a major facelift for 2015 and ended up with an upmarket feel at odds with its bargain price-tag. Does its new luxury layout work? To find out, read our Venus 570/4 review by Alastair Clements.

Elddis has surprised us by announcing a bold new look and a luxurious layout in its flagship range for next year. Join Alastair Clements as he takes a close look and delivers his verdict in his 2016 Elddis Crusader Aurora review in our new magazine.

There’s just one all-new model in the Adria line-up for next year, and it packs in many features. Read Mike Le Caplain’s 2016 Adria Altea 472DS Eden review to see if it’s really a paradise on wheels, as the name suggests.

Two big new 4x4s get the full tow car test treatment in Practical Caravan this month. David Motton says that both the new Kia Sorento 2.2 CRDi KX-3 on our front cover and the latest Jeep Grand Cherokee 3.0 V6 CRD Overland impressed us for different reasons. Check out his tow test verdicts, with facts on kerbweights, towing limits, fuel economy and more. He also brings us his first drive report on the Mazda CX-3 SkyActiv-D diesel.

If buying new is beyond your budget, don’t worry! In our regular ‘Used tow car buyer‘ feature we review the Nissan Pathfinder 2010-2014 and explain what to look for when you buy one of the best lower-priced 4x4s for towing.

In ‘Secondhand shootout’ we compare fixed-bed four-berth caravans for less than £11,000 – and it’s amazing what bargains you can find! Talking of bargains, our Andy Jenkinson gives advice on what to look for when you buy a pre-owned 2007 Bessacarr Cameo.

Now that 2016 caravans are being unveiled, caravan dealers will be looking to shift their older stock. Take our magazine with you while you browse the forecourts so you can check prices with the current Practical Caravan 2015 caravan buyer’s guide to see if you’re being offered a good deal.

John Wickersham gives advice on how to buy used caravans, next. This month he’s full of great tips on how to check the interior upholstery, kitchen equipment, refrigerators and more when you view pre-owned caravans for sale.

We’ve three terrific new Practical Caravan competitions for you to enter this month. Don’t miss out, it’s worth trying to win tickets to the NEC Motorhome & Caravan Show in October, more than £200-worth of caravan security kit, and win a Jovis Hoover. Find out more and enter our new competitions by 8 September.

Visit Bath, Bletchley Park and Provence this month, as we travel to some of the most picturesque and interesting places in England and France. Soak up the past in beautiful Bath, the best Roman spa town in the west.

Pack the van for a longer trip and follow Bryn and Janice Sadler’s route south to Provence, where they discover the prettiest road in France and recommend a great place to stay.

Sites and sightseeing in the North-east of England selects great places to go for moorland, seaside, exciting cities and more. We’ve found 10 great events to check out and 10 super sites to match.

Also in our latest magazine we bring you 12 barbecue reviews, give our DIY guide to fixing broken Seitz caravan blinds and plenty more.

Don’t miss the September issue of Practical Caravan – it’s in the shops now!