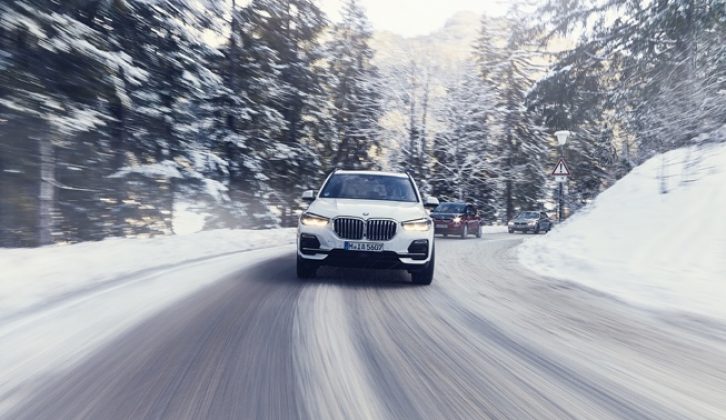 Switching to petrol, the 3.0-litre, six-cylinder engine has immense power and speed New benefit-in-kind tax rates are being introduced for plug-in hybrids, which could mean the xDrive 45e is an absolute bargain for company car drivers

It seems odd to think of a 2.5-tonne 4×4 as green, but short of a pure electric vehicle, the BMW X5 xDrive 45e is about as environmentally conscious as big SUVs get. BMW’s big plug-in hybrid is also great to drive, luxurious to travel in, and savagely quick. It has serious potential as a tow car too.

An official range of 30 miles or so is typical of a hybrid driven on electric power alone, which often translates into more like 20 miles in practice.

The BMW addresses this with a large capacity, 24kWh battery. This gives the 45e a claimed electric range of 54 miles. That’s more than three times as far as the previous X5 plug-in hybrid. For a great many owners, daily driving can be accomplished without using a drop of fuel.

When you do drive far enough to need petrol power as well, a 3.0-litre six-cylinder engine with 286hp wakes from its slumber. Clearly, the car’s emissions go up at this point, but the big X5 is capable of hurling itself towards the horizon at an eye-popping rate. With both electric and petrol power working flat out, there’s 394hp and 443lb ft of torque.

Driven with more restraint, and regular battery top ups, official figures suggest the car is capable of 188.3-235.4 mpg. In reality the car’s real-world economy will depend heavily on the distances driven, and the frequency of recharging. However, the size of the battery and the all-electric range it provides suggests long-distance economy should be acceptable for such a powerful and heavy car.

And it is very heavy indeed. With a kerbweight of 2510kg, the 45e is 300kg or so heavier than an X5 diesel. That gives an 85% match figure of 2134kg. The legal towing limit is 2700kg, so even the very heaviest twin-axle caravans can legally be towed by the BMW.

What of its towing ability?

There’s every sign it will handle a big tourer with ease. We were thoroughly impressed with the X5 the last time we towed with one, and the 45e’s extra heft and performance should only improve its towing ability.

As standard, the 45e is fitted with adaptive dampers and air suspension. The combination makes for a controlled and civilised ride, which bodes well for stability while towing. Tweaking the settings can firm things up if the road is twisting and empty, or soften things off if you’d rather waft along in comfort.

So far so good, but there are a few compromises if you choose the xDrive 45e over a non-hybrid X5. There are five seats, rather than the seven that the standard car can be specified with. And luggage space suffers, dropping from 550 litres to 500 litres with the seats upright. That’s below average for a big 4×4, but there’s still a large, square space for your luggage. For many, it will be a compromise worth making.

It may not have a third row of seats or quite so much space for your bags, but otherwise the 45e is as luxurious as any other X5. The cabin is well made from high quality materials, and the infotainment system is excellent, the huge screen looks more like an upmarket TV than a sat nav display, and it’s easy to use.

You won’t be surprised that all this performance, technology and quality doesn’t come cheap. Prices start from £63,165 for the X Line, rising to £66,665 for the handsomely equipped M Sport. However, the Volvo XC90 T8 plug-in hybrid costs at least £66,645, so it’s certainly not overpriced compared with the competition.

In fact, if you are a company car driver with a generous monthly leasing allowance, the xDrive 45e could be an absolute bargain. That’s because in April new benefit-in-kind tax rates will be introduced for plug-in hybrids, which take account of the car’s electric range as well as its carbon dioxide emissions. Because of its high range and low emissions, running this big 4×4 as a company car will mean tax bills similar to someone choosing a family hatchback.

Even if you buy your own car rather than being supplied one through work, the xDrive 45e’s running costs promise to be extremely low for such a big SUV. So long as you have somewhere to charge it overnight or at work, we’d be tempted to choose it over an X5 diesel.

We’ll keep on twisting BMW’s arm to borrow one for a full tow test soon.

For a great many owners, daily driving can be accomplished without using a drop of fuel