The dull old light unit was still working, but desperately needed to be upgraded First, remove the old light cover and take out the screws securing the unit to the caravan Next, disconnect and remove the old light switch, making note of where each wire went Cut and insulate the old wires using a wire-stripper, before tucking into the wall Open up the hole as necessary – we used a 22mm wood bit, but your situation may differ Check the wiring location on the new unit, then drill a pilot hole and then an 8mm hole If there is a halogen bulb in the new light unit, consider replacing with an LED bulb Add new trunking inside the caravan behind the light, and drill an 8mm hole for the wires 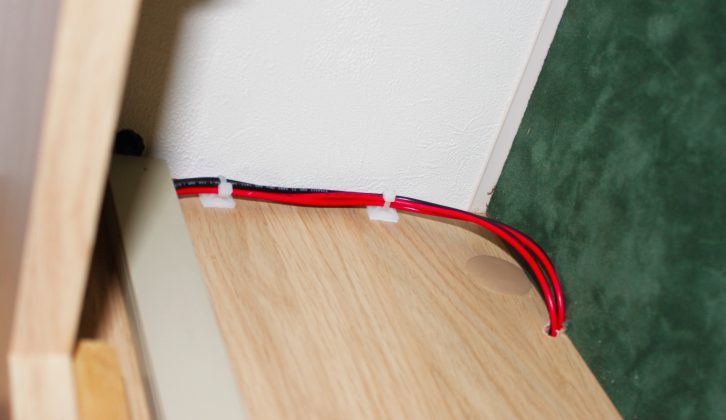 The new unit is a lot smarter, and the LED bulbs mean that it’s also more economical

The 17-year-old awning light fitted to my parents’ ageing Abbey caravan still worked, but shone a dull yellow rather than its original white.

We’d cleaned the cover several times, but the plastic had discoloured with age. Not only that, but it also had its original bulbs, rather than energy-saving LEDs. It was time for a change.

We bought a new twin-LED light incorporating a photocell. Although it was one unit, the lights operated independently of each other.

The LEDs were wired separately to the main light, which was a power-hungry halogen bulb. So a new switch would be required, together with some re-wiring, and at the same time the halogen bulb would be changed for another LED unit.

Because we would be working with the 12V system, both the mains power and 12V battery were disconnected, before starting the upgrade to LED awning lights.

The tools required for the job were:

The new light unit was carefully chosen to be slightly larger than the original, because it was inevitable that the screw holes securing it to the side of the caravan would be in different positions. The power cables were in different places, too.

First, the old cover was unclipped from the light, and the screws securing the unit to the caravan removed.

It was amazing that the light had worked at all, because when we started to remove the various electrical connections, most of them disintegrated.

It might have been possible to re-use the power cables on a new unit if it only required a switched single live feed and single earth, but our new unit required two of each, so a re-wiring job was required.

Because the original wiring ran inside the wall and roof of the van, we had to make the job as neat as possible using trunking.

Out with the old…

With the old unit removed, the old power cables were trimmed and the ends insulated with tape (the other end of the power supply would be disconnected from the switch so would no longer be live), before being tucked inside the caravan wall. All the old holes were then filled with Carafax IDL 110 sealant.

Working inside the caravan, the wall switch that operated both an internal light and the awning light was removed, and the cables disconnected (making a note of which wire was where for the internal light).

The cables ran inside some trunking through a dresser cupboard, which gave us easy access when the cover was removed.

We’d bought a new triple light switch that matched the original, but the hole where the switch had been mounted needed enlarging.

Using a 22mm wood-bit and a Stanley knife, the hole was opened out so the switch would fit.

After carefully measuring where the new light unit would go, an 8mm hole was drilled through the caravan wall (having drilled a much smaller pilot hole first) where the wires would need to pass through to the inside.

With that drilled, some self-adhesive trunking was fitted and then, working from the outside and using the 8mm hole, the same hole was drilled through the back of the trunking, before another hole was drilled into the dresser cabinet to where the original wires were.

…and in with the new!

Prior to fitting the light unit to the caravan, we changed the original halogen bulb for an LED unit.

The new light unit was supplied with self-tapping screws, which were used to loosely attach it to the wall, feeding the wires through the hole in the wall first.

Bullet connectors were crimped to the ends of the wires feeding the Photocell LEDs, and spade connectors for the awning light.

With the original power feed from the battery connected to the new switch unit, power to the other two switches was piggy-backed from this (as the originals had been).

Then two lengths of red (live) cable were run from the switches to the cables from the light unit (with their respective crimped connectors).

Next, an earth cable was re-routed, which was connected using a terminal block to two lengths of earth (black) cable.

The loose ends of these were again connected to the ‘spare’ cables from the wires attached to the light unit.

The moment of truth

With the switches in the ‘off’ position, the 12V battery was re-connected in order to test the various lights. Fortunately, it all worked first time.

With all working as it should, the battery was disconnected and the light unit was removed then sealant applied to the back of it and around the hole, where the cables enter the caravan, plus around the screws and screw holes. The unit was then secured to the caravan wall.

Internally, the cables were tidied inside the trunking, and finally the switch unit was secured before re-attaching the 12V battery.

And that was the job done, the new LED awning lights a huge improvement.

The plastic had discoloured with age and it had its original bulbs – it was time for a change! How to install LED lighting