Although they are from different eras, the Castleton and Ford are an ideal match 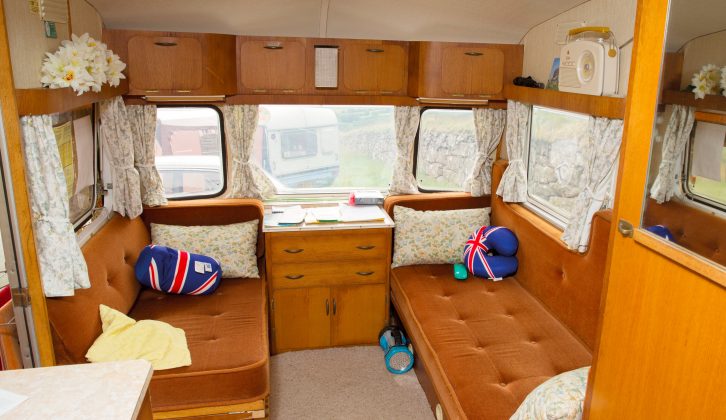 The comfortable lounge of this vintage caravan makes up into a double bed, with a fold-out bunk above The side kitchen is well-appointed, with a hob and sink that can be hidden under the worktop This Castleton Roadsman still lives near its Dorset birthplace During the restoration, repairs were required to the timber frame at the rear corner Damp had badly damaged parts of this vintage caravan’s frame Despite its classic looks, this is actually a 1981 model The side stripe was painted to match the Ford Zodiac, plus a period awning was sourced

Steve Hembry and wife Jan own one of the most stylish outfits you’re likely to see: a Ford Zodiac and a Castleton Roadsman.

But it didn’t come easily, or quickly.

The saga began with a love of classic cars, and one car in particular.

Steve has long been involved with the Ford MkIII Zephyr and Zodiac Owners’ Club, producing the bi-monthly club magazine for the past two years and as membership secretary for a year.

It makes sense, then, that his pride and joy is a 1966 Ford Zodiac MkIII. And what better to pair a classic car with than a vintage caravan?

Castleton tourers are among the most loved in the classic and retro caravan world, and were known for their build quality and the use of traditional building techniques. Plus, they were produced just down the road from Steve in Dorset.

“I have fond memories of family holidays in the 1970s, when we would go to a pre-sited caravan, and decided that I wanted a classic van to take to classic-car rallies,” says Steve.

“A farmer had posted an advert for this 1981 van in a magazine that I read, so I went for it. I picked it up from a small village near Sherborne – it hadn’t gone far from the factory where it was made!

“I moved it to the shed that my dad and I share, so that it could be kept under cover while I did the restoration work.”

“The caravan was fairly complete when I collected it, ” Steve continues. “All of the fixtures and fittings were there, and it even came with the unusual additions of a hairdryer and a Hoover!

“The only major concern was that there was some damp in the corners. Because of the building technique, water tends to get in through screw holes, but this caravan also had broken rooflights, so the damp was hardly surprising.

“Luckily, the chassis was fine and all I had to do was refurbish the brakes. In fact, it had a feature that isn’t seen in modern tourers: huge bellows beneath the chassis, presumably part of the vacuum-assisted braking system. This must have been an optional extra, because it wasn’t standard issue.”

This isn’t the only variation that the caravan had from the regular Castleton Roadsman: it also had an extra berth. Most were two-berths, but Steve’s has a third bed in the form of a fold-out bunk above the make-up double.

Getting hands on with it

“When I got started, I was determined to keep it as authentic as possible. However, I wanted it to match my Zodiac, so I resprayed the stripe from the original Tobacco colour to a grey similar to that of the car.

“Another unusual aspect is that it has awning rails and doors on both sides; it didn’t come with an awning, though, so I found one from a similar period. There is also a built-in step.”

It is a good thing that Steve had somewhere dry to store the caravan, because the work involved de-panelling and working from the outside in, due to the fact that the furniture couldn’t be removed. All in all, the project took about 18 months.

“Considering that it took me 13 years to finish work on the car, and even then I had to use our wedding as a deadline, this was pretty quick,” says Steve.

“I could have done it in one month, but other commitments meant that I could only work on it sporadically.

“It had been used as a site office by the previous owner, so it was kept habitable. In fact, it still had soap in the soap-holder, owners’ club rally badges, and a key in the drinks cabinet. I did have to strip the water heater, service the gas heater and replace the fridge. I found one from the same era, to keep it original.

“I did all the mechanical work, electrics, woodwork and spraying myself, which helped to keep costs down but meant that it took longer.”

Steve originally bought the Castleton so that he and Jan could have more comfort when they go to car rallies, although before each one he has to check that it is okay to bring a caravan, and that there will be space for it as well as the car.

Despite the fact that the Roadsman weighs 850kg, which by modern standards is very light, the first tow with the Zodiac was a struggle. The car initially got very hot, but Steve quickly fixed it.

“I love that the caravan is coachbuilt,” he says, “that it was built locally, and that it gives us the freedom to mix holidays with not only classic car events, but also classic caravan events, too.”

More recently, the couple has discovered the Retro Caravan Club community, after being told that the Roadsman was “too new” by other clubs.

It was on the RCC’s Cornwall rally that we met up with Steve and Jan, and they showed us around the Castleton.

The front lounge is spacious, with lots of pretty touches such as a retro radio and delicate flowered curtains, which are in keeping with the caravan’s era. There is a solid central chest of drawers, and plenty of space for a table.

The kitchen, towards the rear, has a sink and hob that can both be tidied away beneath the counter top, as well as a fridge and an oven, and the large windows give it plenty of light.

In the rear left-hand corner you’ll find the washroom, which has its own door out of the caravan, although Steve and Jan don’t tend to use it. There is also a generous wardrobe.

All in all, it is a very comfortable van, and should keep Steve and Jan cosy on many rallies to come.

“The RCC is just what I was looking for,” says Steve. “There are two Club rallies a month and I can still participate in various classic car events, too.”

A ticket to freedom

One of the best things about owning a classic or vintage caravan is knowing that it has a story to tell, that someone, somewhere has memories attached to it.

“I did a bit of digging into the van’s history,” explains Steve. “I went to see Les Bennet, son of the owner of Castleton Caravans, and he told me that my van was sold in 1981 to a caravan dealer in the New Forest, and that when it left the factory it was painted white.

“I’d already used the DVLA records to check previous keepers of the Zodiac. I even managed to track down and meet up with the wife of the first owner. She gave me a picture of the car in Cheddar Valley, which is a nice keepsake.”

Now that Steve and Jan have the Roadsman, they plan to travel as much as they can.

“We want to see more of the UK. Foreign travel is becoming more expensive, airports are more onerous and there are increasing concerns about personal safety abroad, so touring seems the perfect fit.”

That’s if he has time, having taken on another project: a 1965 Owens Runabout speedboat. “We live near the coast,” says Steve, “and it means we can explore places we can’t reach by car. It seemed logical to get one from the same period as the Ford.”

One thing’s for sure: just like their car and caravan, it’s bound to be a picture-perfect equipe.

I was determined to keep it as authentic as possible – however, I wanted it to match my Zodiac Prepare your van for the road Top UK road trips – our pick of the best routes Survey reveals two thirds of drivers own a road atlas