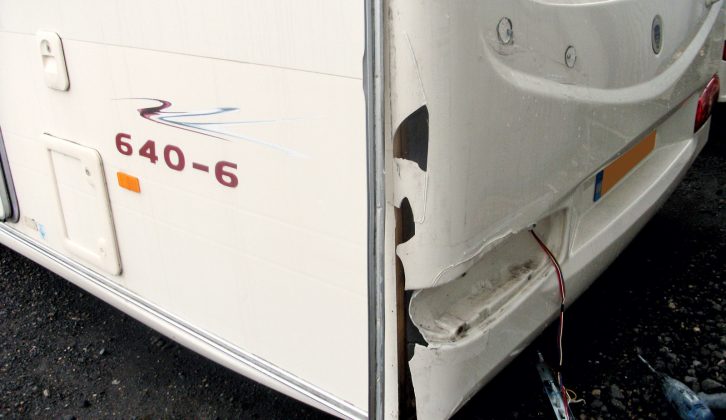 The caravan panel is cleaned and stripped of all decals, lights and other equipment so the full damage can be examined. The affected portions are removed The cracked caravan bodywork is repaired by welding sections of ABS to the existing panel, and then smoothing it to ensure there are no tiny gaps through which moisture can get in When workshop staff are satisfied with the finish of the ABS, a primer is added and imperfections are rectified. Panelworks uses a spectrometer in order to match the paint perfectly to the panel’s actual colour and then applies it The finished article: awning rails and lights are refitted, and decals are reapplied. Even obsolete models, such as this Avondale caravan, can be returned to their former glory, because new panels are not needed Nothing goes to waste in this caravan bodyshop, not even old panels, which are stored in a ‘panel graveyard’ for potential reuse A damaged panel is cleaned and examined, and decals are removed This caravan will soon look as good as new on the outside – and if the shower tray’s broken inside, that can be fixed too! 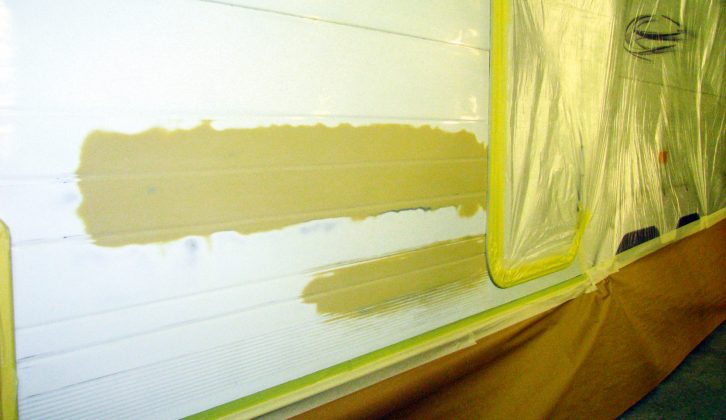 No two used caravans are exactly the same shade, but Panelworks gets a perfect colour match so it can repaint a small area, not the whole van!

Be honest: how many of you thought, as I had, that external moulded ABS panels on a caravan (whether front or rear panels, wheel spats or A-frame fairings) had to be replaced if they were damaged? That is, rather than being repaired.

This was the impression that Jonathan Goulden had as well. He was working as general manager of Yorkshire Caravans, his family’s business in Bawtry, Doncaster. However, he saw insurance companies writing off tourers for minor damage to plastic panels or new panels being supplied and old ones being dumped, and thought it was a terrible waste. These practices prompted him to begin experimenting with repairing ABS plastic. That was in 2004 and it was all done in his spare time.

In June 2008, he established Panelworks and set up its premises in the grounds of Yorkshire Caravans. From experimenting with ABS, the company has become highly proficient in repairing not only ABS, but also GRP and aluminium, even when there’s ribbed or stucco detailing. I recently met Jonathan to see how the work is done.

Putting old panels to use

The workshop had a number of caravans in for repairs; the rear corner of one was damaged, a common issue with twin-axle tourers. At one time, this would have required completely new rear and side panels.

“We cut out the damaged areas in the aluminium sidewall and put in a new piece after any structural damage is repaired,” Jonathan explained. “The new piece is bonded in and then it is painted and finished. If the rear ABS panel has a split, we do a plastic-weld to repair it.

“If a section needs replacing, we can often cut a piece from a damaged panel we have in stock, and weld that in place. We never get rid of old panels, because there’s always something that we can salvage from them.”

One of the staff, Pete, was working on a Bailey Senator with a damaged side panel. “First of all, everything is cleaned and decals are removed, so we can see what we’re dealing with,” Pete told me. “You must have a keen eye, because the last thing we want is to do a repair and then find a small dent somewhere and have to start again.”

For ribbed panels, a mould of the ribbing is made using latex. The mould is then stuck over the area to be repaired before a specialist liquid filler is injected, which, when set, forms a perfect match. We continued on to the paint shop where a Lunar Lexon was prepared for painting in a heated, dust-free environment. To get a perfect match, a spectrometer is used.

“We’ve perfected paint matching to such a degree that we can just paint a small area, rather than whole panels,” Jonathan said. “We can even do silver, which is notoriously difficult to match. It’s no good just getting the paint from stock and hoping it’s a good match, because no two vans are the same. For instance, one might be taken abroad and be in bright sunlight for extended periods, which may cause faster fading than on one that’s kept in the UK.”

Panelworks also produces a line of exact-match touch-up paints for caravans. As we left the workshops, I was shown a silver-sided Buccaneer whose GRP sidewall had been repaired. Jonathan pointed out where, but the standard of work was so high, I couldn’t tell. “The paint is very durable and won’t fade or go dull,” said Jonathan, “and all our repairs have an 18-month warranty.”

We then went to the ‘panel graveyard’, where I was shown a stack of front and rear panels; some were missing sections which had been removed to be used in repairs. Other panels, stored inside, had been refurbished. “Some of those are no longer available from manufacturers, so we will also supply other repairers,” Jonathan said.

Panelworks has been so successful that, not only is it the first port of call for many insurance companies, but a number of van manufacturers use its services. They agree that it’s far more cost-effective to repair than to replace. Repairs are not limited to exteriors, though: shower trays can be repaired in situ. The quality of workmanship is so good that the finished product may be better than the original.

So there you have it – whether you scrape your caravan during a tight encounter in a country lane, or somebody drives into the back of you, the chances are that you can get it repaired. This behind-the-scenes feature reveals what’s possible with minor bodywork damage. In another article Practical Caravan looks at sourcing caravan spare parts from caravan dismantlers (scrapyards) and other sources.

You must have a keen eye, because the last thing we want is to do a repair and then find a small dent somewhere and have to start again