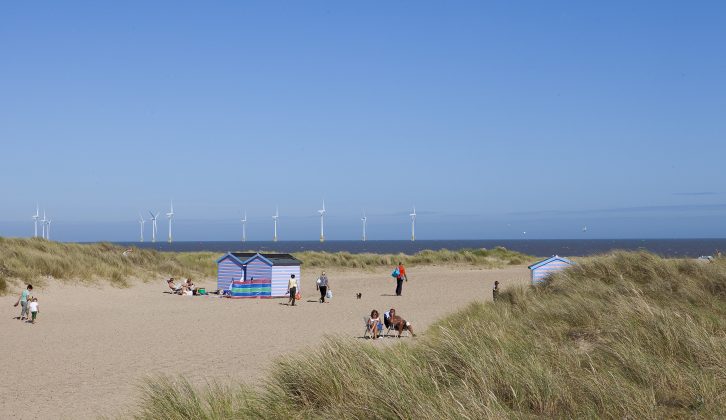 Enjoy long, lazy days on the beach when staying at campsites in Great Yarmouth on your caravan holidays in Norfolk

Go birdwatching near Yarmouth at Berney Marshes and Breydon Water RSPB reserve. Going birdwatching in spring is rewarding because you’ll see waterfowl and wading birds singing out for mates and jostling for the best nesting sites. Winter is another great time for birdwatching in Norfolk, when 100,000 waders and wildfowl arrive on the marshes.

Take a seal-spotting boat trip from Great Yarmouth to Scroby Sands. These inquisitive mammals enjoy a spot of sunbathing on a sandbank at Scroby Sands and boats leave Central Beach in Great Yarmouth every day from early May to the end of September. If you’re really lucky the seals will swim around your boat to see what’s going on. The boat trip lasts around an hour, depending on sea conditions, but you should allow two hours in total, to include embarking and disembarking. Don’t forget your camera!

See a show at one of the Great Yarmouth theatres during your caravan holidays in Norfolk. The Britannia Theatre, on Britannia Pier, hosts many shows every summer, from children’s entertainment, to stand-up comedy, singers and even psychics, or how about the Pavilion Theatre Gorleston where you can see live music and comedy. St George’s Theatre is sited in a fine Baroque church that dates back to 1721. The building has had many uses over the years, but fell into disrepair a few years ago. After a large restoration project it reopened as a theatre in November 2012. It’s now showing films, one-man shows and live music of all genres. It offers acting classes and has a youth theatre, too. The Hippodrome Great Yarmouth describes itself as ‘East Anglia’s mini Albert Hall’. Its shows include circus acrobatics, daring stunts, a water spectacular and comedy. In the same place is The Hippodrome Circus Museum, with more than 100 years of circus memorabilia, exhibits showing how the old water spectaculars were performed, and old props, such as Houdini’s water churn escape.

The best cafés in Great Yarmouth include Woody’s, Mark’s Pantry, The Market Row Café, The Dining Room near Britannia Pier and The Hamburger in Regent Road. You could even start the day with brunch in Waterways Café on North Drive. Special mention must also be made of the wheelchair-friendly Merrivale Tea Rooms, part of the model village attraction in Marine Parade, which offers a good choice of amazing cakes, including gluten-free delights. For the best evening meals in Great Yarmouth, try the award-winning Café Cru Restaurant in the four-star Imperial Hotel, North Drive – the Sunday lunch menu is also good value.

If you’re travelling from Scotland, northern England or The Midlands for your caravan holidays in Great Yarmouth, head for Norwich, then take the A47 east to Great Yarmouth.

From London and the south follow the M25 to the M11, then drive north up the M11 to junction 9 and take the A11 towards Thetford/Norwich. Once you reach the outskirts of Norwich, take the A47 towards Great Yarmouth. Or you could take the A11 to Newmarket, then the A14 to Bury St Edmunds, followed by the A143 which will take you to the Norfolk coast.

If you’re starting in Essex, get on the A12 and drive to Ipswich, then continue on the A12 to Lowestoft and, eventually, Great Yarmouth.

All these A roads are good for towing, but as some are single-carriageway in places, they can become congested, particularly at peak holiday times.