The BMW 5 Series Touring is priced from £38,075, making it one of the most expensive in its class 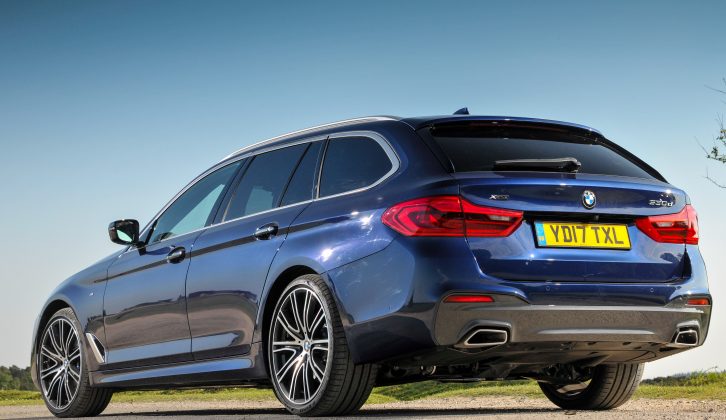 Others offer more boot space, but the estate’s 570 litres is still decent – and 10 more than before The BMW 530d Touring xDrive M Sport is a fine solo drive – and with an 1875kg kerbweight, will be a good match for a range of caravans

Time was that BMW didn’t pander to practicality. You got two or four doors for your executive transport, and the dog just had to lump it.

That all changed in 1987 with the launch of the E30 3 Series Touring, and the 5 Series followed suit three years later.

It’s hard to believe that it has been nearly 30 years, and that 2017 marks the launch of the fifth-generation 5 Series Touring, a car that has proved popular with caravanners over the years for its blend of luxury, practicality, stability and usefully high kerbweight for outfit-matching.

It’s that latter point that made us concentrate on the flagship 530d xDrive at the launch.

Despite weight savings of up to 100kg across the board, the rear-wheel-drive 520d that we also drove still weighs in at 1735kg.

But opting for the six-cylinder engine brings another 90kg and the four-wheel-drive system – now available for the first time on right-hand-drive Tourings – a further 50kg, lifting the 85% match figure from 1475kg to a generous 1594kg.

Of course, BMW is renowned for its petrol engines, too, and enthusiasts of petrol power get the choice of two 2.0-litre four-cylinder units and a 3.0-litre six, all turbocharged and offering from 181-335bhp, plus there will be a more powerful 228bhp version of the 2.0-litre turbodiesel to follow.

With a storming 295lb ft of torque – 81lb ft more than the entry-level petrol – the 520d should be man enough for most towing duties, though it does feel a touch breathless on steeper inclines and is more ready to downshift than the muscular ‘six’.

And that is no great surprise when you learn that the 3.0-litre diesel has a monster 457lb ft of torque, more than enough to effortlessly haul any sensibly matched caravan (and probably plenty of not-so-sensible matches, too) – it is clear what tow car potential the BMW 530d has.

There are two trim levels available, SE or the £3k costlier M Sport. And the £38,075 entry level price makes the Touring one of the priciest cars in its class.

But you do get bags of standard kit including leather trim, an electric tailgate, self-levelling rear suspension and an eight-speed automatic gearbox with steering wheel-mounted pedals.

The xDrive all-wheel drive is a £2000 extra, but we suspect that many caravanners will be tempted to tick that box for the additional weight and traction, which should come in handy when pulling your van off a particularly slippery pitch.

When it comes to practicality, an E-Class Mercedes-Benz wagon is roomier – as is a Škoda Superb, in fact – but the boot is now 10 litres larger than before, at 570 litres (or 1700 litres with the rear seats folded), and still boasts the fabulously useful addition of a split tailgate.

There’s room in the rear for a six-footer to sit behind a similarly tall driver, helped by sculpted cut-outs in the back of the front seats, and there’s plenty of shoulder room, though the outer edges of the rear bench are heavily sculpted.

Up front, enthusiastic drivers will have few complaints about the low-set, sporty driving position behind a chunky three-spoke wheel.

And that sporty feel continues on the move: surely there are few large estate cars that are as entertaining – or able – on a favourite B-road.

The BMW’s steering lacks feel but is beautifully weighted, the body control is exceptional and the sustained, effortless thrust from that sonorous straight-six engine is a joy, aided by near-imperceptible changes from the slick auto ’box.

Actually, at times it’s a bit too noisy – the 520d is notably quieter at tickover, and there’s a fair amount of wind rustle around the front screen pillars.

Our test car was fitted with the costly option of adaptive dampers and they are certainly impressive: the ride is compliant, quiet and well damped, even in ‘Sport’ mode – which you’ll appreciate when pressing on, because ‘Comfort’ can get a touch floaty at speed.

And those dampers are just the tip of the technological iceberg, because the new BMW 5 Series is packed with electronic aids to boost both safety and comfort.

This includes ‘Active Guard’ which will apply the brakes for you in an emergency, and among the features of ‘Driving System Plus’ is an automated cruise control that brings an element of semi-autonomous driving – including automatic overtaking, and the ability to park your car remotely using the key.

The tablet-style central touchscreen is well sited and intuitive to use – and it’s good to see conventional heating and air-con controls as well.

The latest version of BMW’s iDrive even allows you to connect the car to your diary and Microsoft Exchange email account – so you can update people you are meeting if you are running late.

All of this adds extra polish to a car that always felt fundamentally right, just so long as you can afford it.

The 3.0-litre diesel has a monster 457lb ft of torque, more than enough to effortlessly haul any sensibly matched caravan