This Swift Elegance 565 has a new-for-2015 layout, featuring an end washroom and fixed twin beds Swift’s range-topping Elegance is smart and spacious inside, as Practical Caravan discovered at the 2015 model launch The Sterling tourers are Swift caravans for those who want a more modern, less traditional feel You will find LED over-locker lighting, as well as refreshed worktops and wallpaper inside the 2015 Sterling Eccles Sport 442 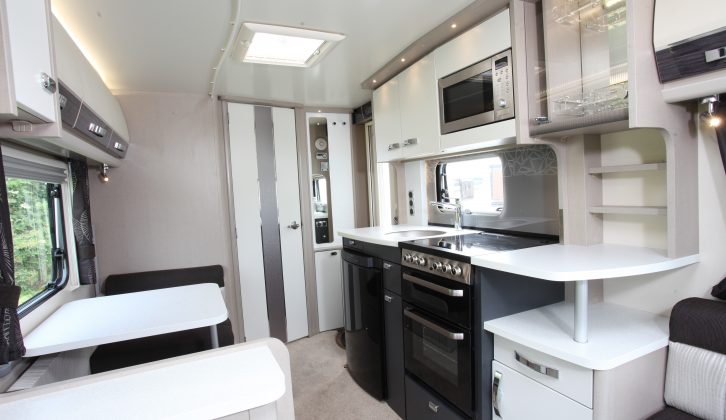 There are now matt-black kitchen doors in the Continental range of Swift caravans, as well as leather-effect vinyl upper lockers with piano-black wood inserts Here is the fixed double bed inside the Sterling Continental 630 which, like all Swift’s fixed bed 2015 models, has a Duvalay Duvalite mattress The living space in the Sterling Continental 630 is spacious, bright, modern and airy Timberless construction methods are used in the top of the range Sterling Continentals, like this 630 model

The UK’s largest caravan manufacturer, the Swift Group, today revealed its new range for the coming season. The key difference to the look and feel of 2015’s Swift caravans is the new ‘Aralie Sen’ woodgrain, whose greyish tones give a more contemporary feel. It features in all models, from the range-topping Elegance down.

The Elegance series was only launched in February, so unsurprisingly, it hasn’t been reinvented just six months later. But there are three new layouts (shared by its Continental twin from the Sterling brand): 530, the rallyer’s favourite, with a side dinette that turns into bunks to make it a four-berth, with a large end washroom; the 565, with fixed twin beds and an end washroom; and the twin-axle, fixed-double 630. Elegance models also get gloss doors to the front chest, and both Elegance and Continental will now feature Al-Ko Secure wheel locks as standard, plus wiring provision for a motor mover.

The remainder of the Swift line has been updated with a new one-piece door, refreshed graphics and upholstery, plus Scorpion alloy wheels. Inside, there are new chrome taps and an improved bi-fold shower door, revised LED lighting, plus Duvalay Duvalite mattresses for all fixed beds. The Challenger Sport now features the Dometic 8 Series fridge from the SE, and all can now be specified with optional ‘Impala’ stain-resistant fabric, too. The Challenger SE and Conquerer gain dimmable spotlights, gloss locker doors and an Alde 3020 boiler.

Moving onto the Sprite caravans and Swift Group’s top-selling sub-brand was much-revised in 2014 to coincide with the launch of its SMART construction, and for 2015 the firm has concentrated on adding value and a little luxury to its entry-level range.

As before, there are eight models in the range, but the old side-dinette Major 4 has been replaced by the Major 4 SB with a transverse island bed. Like all fixed-bed Sprites, it will come with the lightweight memory fibre Duvalay Duvalite mattress already seen in Swift’s more upmarket models. But that isn’t all that the new for 2015 Swift caravans have to offer.

Sterling is the Swift Group’s answer for those who are looking for something a little more modern than its more traditional tourers. The Eccles Sport and Eccles SE were launched last year, but both get a mild makeover for 2015 with a new one-piece door, Scorpion alloys and, like the remainder of the Swift Group’s products, Duvalay Duvalite mattresses for fixed beds. There is also new LED over-locker lighting, plus refreshed worktops and wallpaper.

The Sport has been extended to seven layouts with the return of the 524 four-berth with side dinette bunks and end washroom, and all get the Dometic 8 Series fridge from the SE. The SE range is up to nine models, with the new twin-axle Sapphire featuring a rear island bed, and it now comes with dimmable LED spotlights and an Alde 3020 boiler.

The upmarket Elite line has been dropped, leaving the Continental with its SMART HT timberless construction as the range-topper. It gets leather-effect vinyl upper lockers with piano-black wood inserts and matt-black kitchen doors, along with new models to match its Swift Elegance siblings.