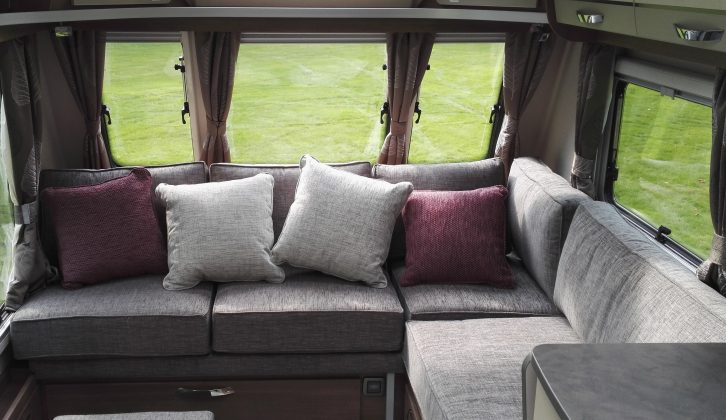 LEDs light the smart cocktail cupboard in the 2017-season Alaria The third Lunar Caravans brand, Alaria will sit alongside the Lunar line-up and the entry-level Venus portfolio. It’s a direct rival to the Buccaneer range from The Explorer Group, which has also been updated for the 2017 season.

All three models in the new Alaria range cost £32,499, excluding delivery, making them more expensive than the £31,699 Buccaneers.

The Alaria is designed to accommodate customers who may be looking to pitch their caravans semi-permanently, and so has a distinctive new L-shaped front lounge with more domestic-style seating and a footstool. A fully hydraulic E&P self-levelling system, a 21-inch Avtex TV and RGB lighting are all fitted as standard. All models come on an uprated 2000kg Al-Ko chassis.

The three layouts available at launch are all based on existing Lunar Delta layouts, starting with the twin fixed single bed TS. There are also two transverse island bed models: the end washroom TI and the central washroom RI (based on the Lunar Delta RI, Practical Caravan‘s Tourer of the Year 2016).

Changing the front lounge to an L-shape has enabled the designers to move the cocktail cabinet into this area – and it has snazzy LED lighting, some of which comes on when you pull up a nearby flap to act as a bar.

This has also freed up the area to the right of the door for the TV with a cabinet underneath it that includes a pop-up bar of power sockets and USB ports.

Other improvements over the already-rather-luxurious Lunar Delta range include an upgraded Aspire 2 oven in the kitchen, and a ladder-style heated towel rail in the washroom.

Lunar Caravans believes the luxury end of the caravan market is growing the most at the moment. Chief executive and chairman Brian Mellor said, “Alaria sets a new benchmark for luxury caravanning. We’ve included many new features as well as an extensive specification that is in addition to the level of luxury already offered in our top-end models.”

The Alaria range will be on show to the public for the first time on the Lunar Caravans stand at this October’s Motorhome and Caravan Show at the NEC Birmingham.