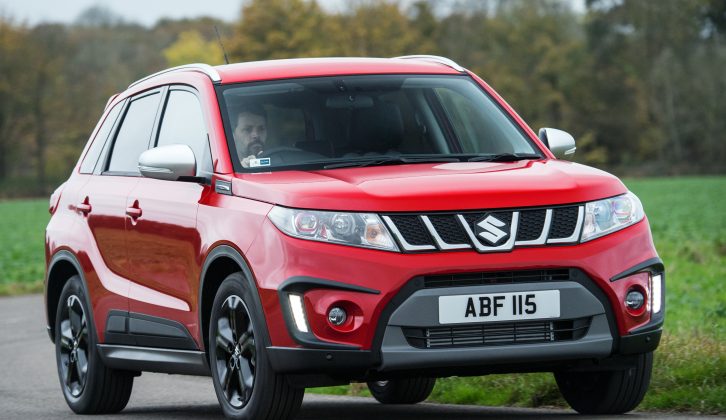 Given that it can only tow lightweight caravans, the Suzuki’s boot is a decent size We expect the new four-wheel-drive Suzuki Vitara S to cost around £21,000 The new Suzuki Vitara S could well be the sweet spot in the Vitara range. It takes most of what’s best about the existing petrol and diesel models to make a very capable small crossover, that should comfortably tow an ultralight caravan.

Earlier this year, the Suzuki Vitara diesel 4×4 impressed us at the Tow Car Awards. For a lightweight car (and with a 1295kg kerbweight it really is light for a four-wheel drive), it towed very well, with good stability and a punchy diesel engine. It doesn’t hurt that it looks great and comes bursting at the panel gaps with high-tech kit. However, the diesel engine is noisy and it costs £1500 more than the petrol.

I’ve spent a lot of time driving the 1.6-litre petrol two-wheel-drive Vitara over recent months, and for everyday driving I prefer it to the diesel. Although significantly less punchy it’s much quieter, and can still achieve close to 50mpg on a long run.

As a tow car, though, it’s held back by its even lower kerbweight (1075kg) and a shortage of mid-range muscle. Even when towing a very light tourer, it takes frantic gearchanges and a heavy right foot to travel at a decent lick.

Although I haven’t had the chance to tow with the Vitara S, the signs are it will be a much better car for towing a small caravan. Its 1.4-litre turbocharged petrol engine improves on the non-turbo 1.6 in just about every way.

The S uses Suzuki’s Allgrip 4×4 system, which as well as having obvious traction benefits when towing in all weathers, pushes the kerbweight up to 1210kg for the manual, or 1235kg when fitted with an automatic gearbox. The legal towing limit remains 1200kg. Power increases from the 1.6’s 118bhp to 138bhp. More importantly, torque improves from 115lb ft at 4400rpm to 162lb ft delivered from 1500 to 4000rpm.

So, the engine punches harder, sooner. That’s just how it feels out on the road, building speed with less effort and providing much more decisive overtaking. The switch from a five-speed to a six-speed gearbox helps, too, so there’s no excuse for being caught in the wrong gear. The shift action also feels more precise and positive.

Don’t let me give you the impression that Suzuki has made the crossover equivalent of a hot hatch. Performance is brisk rather than quick, but the 1.4 turbo’s extra muscle makes the Vitara S more satisfying to drive.

The added performance doesn’t come at the expense of fuel economy; the new engine achieves 52.3mpg on the combined cycle (51.3mpg for the auto), which compares well with the 1.6-litre four-wheel drive’s 50.4mpg.

The turbo engine isn’t the only change to the S; Suzuki has also reworked the suspension settings for a firmer, more sporty ride. This worried me a little as ride comfort is one of the Vitara’s strengths, but the new set up is well judged. There’s tighter control over dips and crests which suggests the Vitara S should make a more stable tow car. But the ride is still supple enough around town.

Otherwise the Vitara S shares most of its strengths and weaknesses with the rest of the range. The driving position is very comfortable indeed, and while not the biggest crossover, the Vitara is reasonably practical. The cabin plastics may be hard and shiny but everything seems well screwed together. Slightly crisper steering would make the car more fun to drive, and less road noise would make it even better at covering long distances.

On balance, the S is my favourite model in the line-up, with price being the only real downside. The S sits at the top of the range, with an expected cost of around £21,000 when order books open next month (first deliveries are expected in January). It comes with all the same kit as the previous range-topper, the SZ5, except for that car’s panoramic sunroof, and lots of unique styling touches inside and out to set it apart from the rest of the range. Even so, it’s a shame the impressive new engine isn’t available across a wider choice of specifications.

However, if you own an ultralight caravan or a trailer tent and want a lively little car to tow it with, the Suzuki Vitara S fits the bill.

The driving position is very comfortable and while not the biggest crossover, the Vitara is reasonably practical