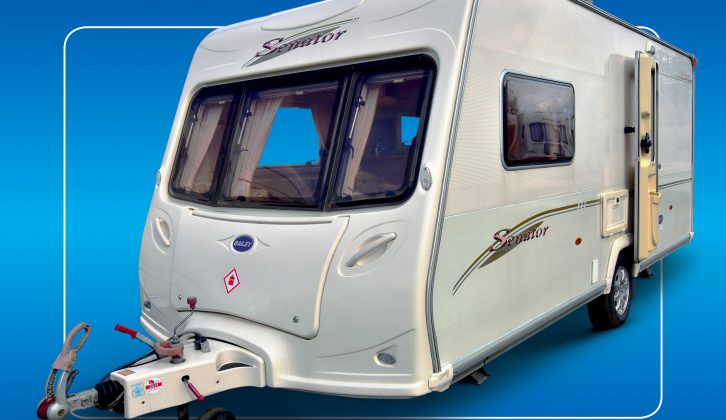 Here you see the standard soft furnishings which usually last well, but check for fading – also ensure that the alarm sensors work Kitchens have a good spec and storage, with a large sink – and this kitchen was in fine condition There are plenty of end-washroom couples’ caravans on the used market, many from mainstream manufacturers.

However, one name stands out for having some top-sellers in the 2000s, and that’s Bailey.

The Pageant Series 5 (launched in 2004) began the trend towards the ‘Series’ system, where Bailey altered the way they brought out new ranges, making changes on a two-year cycle, depending on sales.

The Vermont was one of the most popular from this Senator range of Bailey caravans, with a super-large end washroom, great storage and a spacious front lounge.

And now these are great-value used caravans!

The Senator range was launched for the 1988 season as Bailey’s top-of-the-range tourers.

At first, numbers were used to designate the model, but by 1997, they were using names.

Sales were steady but after the Pageant relaunch, Bailey applied that same magic to its Senators.

Redesigned in July 2005 with an upgraded spec and new bodyshell, interiors, and stronger, bonded roof, the Senators stormed the upper end of the market.

Stepping it up a gear

The front gas locker was large enough to store other caravanning essentials, too.

Storage was vastly improved, in addition to bigger fridges, new alloys and the then latest Status 530 TV aerials.

The body width was increased to 7ft 6in, offering more space inside.

Series 5 Senator range of Bailey caravans had great kitchens and fixed beds, while the seating was of an excellent quality, too.

Weights were kept reasonable, at 1160kg MiRO for the Vermont (full specs below).

Other features included Truma dual-fuel blown-air heating, a microwave and a full oven with a four-burner hob.

What to pay for these Bailey caravans?

Surprisingly, although they were mega-popular, you don’t find that many secondhand Series 5s on the used caravans for sale pages.

In a private sale, you could possibly bag one for £5500, but check around, because prices do vary.

How about a dealer special? We’re talking about a Lunar Ultima, based on the Quasar 462, with good kit. This is lighter but not as wide.

Look out for other specials and expect to pay around £5995.

Another alternative, and another Bailey caravan, is the Pageant Series 5 from 2005.

The Monarch is a few hundred pounds cheaper, at £5295, but is also well kitted out. This model is a tad lighter in weight, too.

A Bailey Senator Series 5 can be a great bargain buy – most have a great spec and they generally wear well.

But do look out for possible damp problems, cracked ABS panels and repair work.

Some of the floors creak, so check whether the furniture fixings need to be tightened.

For a slightly better spec (and a bit more cash), you could track down a Series 6, but the Senator Series 5 makes a brilliant buy.

The Senator range reached new heights when Bailey redesigned it