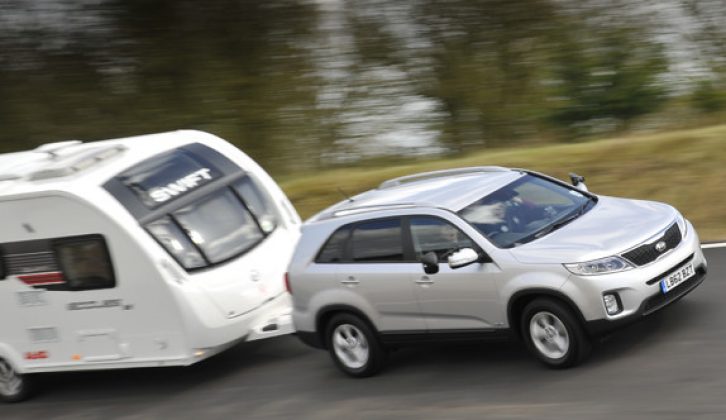 Now the clocks have gone back, some of us will be putting our caravans into hibernation for the winter. But if you prefer to tour all-year round, what are the best tow cars for winter caravanning? Here’s our pick of five used tugs which should thrive on the rigours of four-season caravan holidays.

Back in 2010 the Discovery 4 was the overall winner at our Tow Car Awards. We described it as an “exceptional car” improving on the old one “in just about every area”.

Five and a bit years later, a 2010 car with 50,000 miles will cost you around £22,410 from a dealer, according to What Car?‘s valuation. So, for the price of a fairly basic new Ford Mondeo you can have one of the finest luxury 4x4s on the road.

Land Rover’s reliability is better than it once was, but we’d invest in a used car warranty just in case.

Today’s Hyundai Santa Fe may be a better car, but we’ve still got a soft spot for the previous model. Few 4x4s of recent years have been such value for money.

The 2.2 CRDi engine is happy to roll up its sleeves and put in a hard shift towing any suitably matched tourer, and the four-wheel-drive transmission will keep you moving this winter long after other two-wheel-drive cars have given up.

Five- and seven-seat versions are available, although we prefer the extra practicality of the seven-seater. A 2011 car with 40,000 miles on the clock will set you back around £11,565.

Although it’s beginning to show its age in some ways, the Škoda Yeti remains one of the best crossovers. Choose one of the 4×4 versions, and it’s surprisingly capable off-road or when towing in wintry weather.

VW Group diesels have been in the news for all the wrong reasons over recent weeks, but there’s no doubting the 170PS (168bhp) 2.0-litre diesels have plenty of muscle.

The Yeti is very stable when towing, and good fun in regular driving. Go for an Elegance spec car like the one we tested in 2014, and you’ll enjoy a long list of standard equipment, too.

The new Volvo XC90 is one of the cars of the moment, but the old one was very good in its own right. In fact, it was better value, and that goes double if you shop for a used one.

We tested the XC90 back in 2007, and described it as a “comfortable, composed tow car”.

In many ways the original XC90 was ahead of its time, putting on-road performance well ahead of mud-plugging ability at a time when many big 4x4s were still quite rough around the edges. By 2007 other manufacturers had followed Volvo‘s lead, but it remained one of the best large SUVs.

The kerbweight of over two tonnes is high enough to make the Volvo a suitable match for most tourers, the seven-seat cabin is very practical, and the D5 engine is brawny enough to comfortably pull a twin-axle tourer.

It may not have the polish of today’s car, or the rock-bottom price of the original, but a 2013-vintage Kia Sorento had – and has – a lot going for it as a tow car.

Four-wheel drive should keep you mobile all through the winter, and the beefy 2.2 CRDi engine will pull just about any sensibly matched caravan.

Inside, there’s space for seven. With all the seats upright luggage room is tight, but with the third row stashed away the Sorento make a practical family 4×4.

The best big 4x4s behave better in crosswinds and in an emergency lane change, but even so we’d happily tow long distances with the Sorento.