This Elddis Tornado is from a range of models named after different types of wind – they had single-pane acrylic windows; double-glazing was only fitted on costlier caravans, although that changed late in the 1980s After October 1979, the seven-pin (12N) black plug for road lights was supported by a grey or white seven-pin (12S) plug to run a growing number of 12V accessories 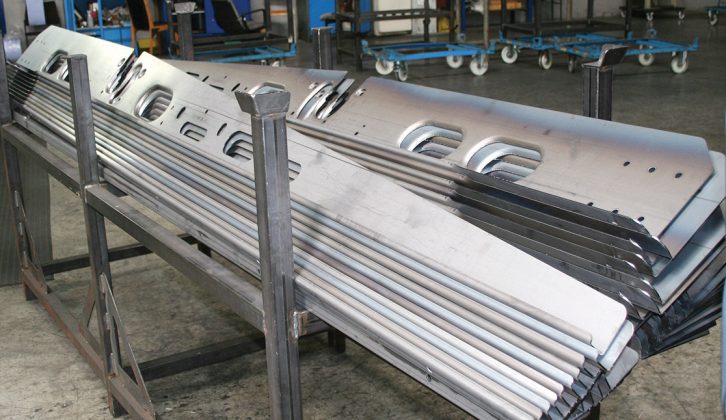 Lunar caravans of the 80s were built on aluminium chassis manufactured near the company’s own factory, instead of using German-produced Al-Ko components – this photo is of a 1986 Swift Silhouette, which also used an alloy chassis made in the UK by Syspal, a company that builds metal structures for a variety of markets Acrylic windows are light and most don’t have frames; be sure to check for faults, which even occur in new ones – you may not find old spares, but EECO can make replacements Adhesive graphics were not often used and screw-on decorative alloy strips were still a feature on this 1989 Compass; sadly the screws may rust and leaks occur Many caravans of the 1980s are susceptible to leaks – persistent care and remounting trim and awning rails on fresh, flexible sealant strips prolong their working life Many caravans of the 80s have small fittings such as this, which formed part of blade-type stabilisers; most modern caravans have hitch stabilisers instead John Wickersham bought this 1990 Compass Rallye, which started leaking 12 years later when someone demonstrated how to clean it with a high-pressure hose – it was a great caravan but further leaks led to it being scrapped in 2012 Many brands include twin-axle models – they are notably easy to tow and reverse, but can be difficult to manoeuvre manually, so don’t discount them when looking at used caravans for sale If CRiS numbers etched on windows look damaged, a thief may have tried to hide the registered owner’s identity – CRiS must be informed when a caravan changes hands Al-Ko chassis, with their characteristic red fittings, were common, but Elddis and other makers used BPW chassis with blue fittings, which are popular on imported caravans If you’re looking at used caravans from the 1990s, you’ll see that many were clad in textured aluminium panels or ribbed surfaces The Carver Cascade water heater was popular for more than a decade – production ended in 1999 but the Henry GE is a copy whose spares fit, and there are repairers This 2000 Swift Archway Barnwell, made for White Arches Caravans in Northants, is an example of a dealer special with extra kit Buying tyres abroad to fit 13in wheels on British caravans was so hard that makers now fit 14in wheels, so check that the spare wheel matches Avondales such as this 2005 Argente don’t have gas connections in the front locker; they’re behind a side door near the axle In 2003, 30mbar dual-gas regulators became standard kit, replacing regulators you bought to fit on your choice of cylinder In 2006, some caravans built on Al-Ko chassis were fitted with receivers that would accept one of the securest wheel locks available Low mouldings, as on this 2000s Elddis, cost little to replace, but new full-height, one-piece end panels are four figures Most roofs couldn’t bear loads, but Bailey caravans launched its prefab bonded panel in 2006 – it was publicised with staff standing on top Bailey’s Alu-Tech system reduced leaks by eliminating screws in favour of clamping the junctions of roof, side and end panels

Every summer, more people consider buying caravans. Whether this is prompted by flight delays, hotel disasters or wet-canvas camping is anyone’s guess.

Other factors come into play, too. For example, as autumn approaches, dealers want space for new-season models, so used caravans need to be sold quickly – bargain prices help.

It makes sense for first-time buyers to start with a pre-owned model because it’s a less costly way of learning what this pastime entails. But what should you look for – apart from the price?

Considerations such as your car’s towing ability, a caravan’s sleeping arrangements, style of soft furnishings and internal layout are obvious issues. There are also technical points to consider because caravans are constantly changing, and that’s where guidance is needed.

Notwithstanding ‘golden oldie’ bargains, caravans built before 1980 are usually collector’s items. They had clumsy chassis, little insulation and heavy glass windows that are hard to replace. (Here’s our advice on caravan restoration projects.)

For those reasons, our overview encompasses 1980-2009 models because that’s a period when significant changes took shape. We’ve also confined our attention to external features: internal fitments are for later appraisals.

Also be aware that caravans (unlike cars) don’t have mandatory supporting papers that verify their date of manufacture. So you’ll find several pointers here that will help confirm a caravan’s age.

This era began with the launch of lightweight chassis and plastic windows, plywood floor panels (which were bonded to block insulation), and twin electrical plugs to link the tourer to the tow car.

While their external appearance was not very different from the models that preceded them – at least to the untrained eye – construction methods were radically different.

This period was characterised by the popular use of painted aluminium panelling that bore a textured surface.

Lightweight chassis from two large German manufacturers – BPW and Al-Ko Kober – became standard and their brake assemblies and wheel bearings were changed around 1992.

Out went brake drums held by a split-pin and castellated nut, which DIY repairers tackled with ease. In came sealed bearings and retaining, self-gripping, one-shot wheel nuts that were being fitted on cars at the time and could only be removed using a special torque wrench.

Graphic adhesive transfers replaced many screw-on plastic badges, although body leaks continued to shorten the working life of too many caravans.

The Central Registration and Identification Scheme (CRiS) was launched during these years. Since then, every new UK-built caravan has had a vehicle identification number (VIN) etched onto its windows and stamped on the chassis.

During this decade, more changes to features were probably made than ever before. Security components, gas supply alterations, increasing wheel sizes, new forms of body construction, and coupling plug revisions all had an impact on caravanners’ experiences. Not all changes went smoothly but technological advances were pleasing to note.

Without doubt, if you plan to purchase a caravan built in this period, check the photos in our carousel at the top of the page.

Thermal insulation has also improved and some models submitted for cold-chamber testing have been shown to maintain warm interiors in extremely low temperatures. The evolution of caravan construction methods continues relentlessly.

What should you look for – apart from the price?