John Wickersham, author of the Haynes Caravan Manual, offers practical advice on how to get the best out of your caravan’s cassette toilet – and even how to fix a leaky loo! 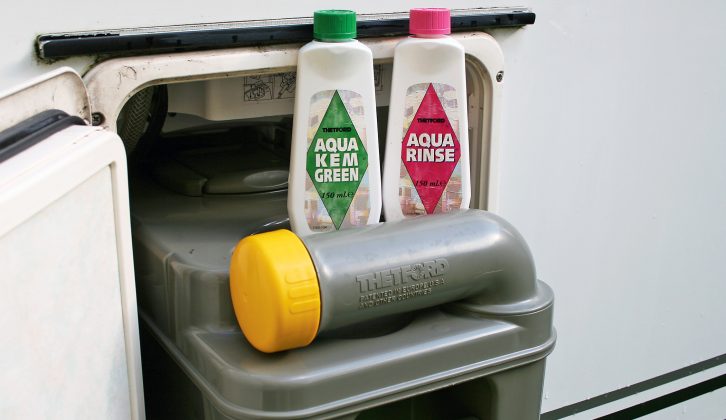 Camping accessories shops sell specialist toilet fluids for caravans and there are plenty to choose from – some liquid; some crystals; some kinder to the environment than others Add the right amount of proprietary caravan toilet fluid carefully to the cassette outside the caravan, using the spout rather than the bowl to avoid damaging the rubber seal – and also avoid spilling chemicals on caravan carpets and furnishings Some caravan toilet fluids are designed just for the flush fluid, while other fluids do both jobs Don’t forget to empty the bowl and close the blade before heading to the external locker and removing the cassette, then taking it to the dedicated chemical loo disposal point to empty it out Some chemical toilet fluids can stain your caravan furnishings and flooring Careful not to lose the cap from the emptying spout in your caravan loo cassette – never place it on the edge of the chemical toilet emptying point like this, or it’s bound to go flying in! Many people add water and shake the cassette vigorously before emptying it – but please just swirl gently, or you’ll damage the float mechanism for the level gauge If you’ve opened the sliding flap to clean the loo cassette, make sure you close it before sliding the cassette back into position in the caravan 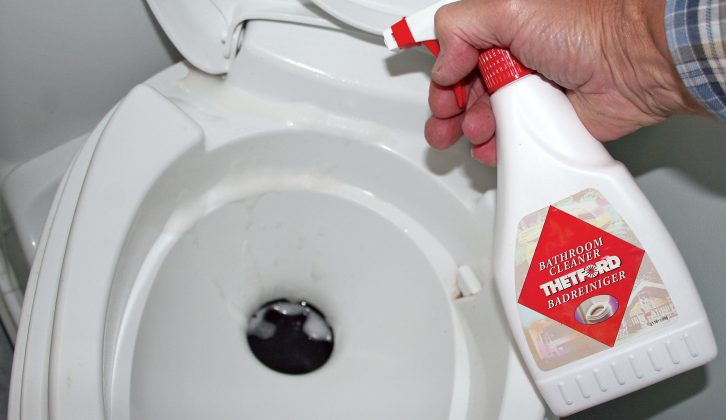 Buy renovation fluids for your caravan toilet for the annual spring clean, because you can leave them to soak in for a while, then any grime will rinse away If your toilet electric flush fails to work, it may just need new batteries – unless it’s powered by the caravan’s leisure battery If you have a leaky caravan toilet cassette, try replacing the ‘O’ rings – the easiest to replace is the one on the emptying spout The hidden parts of a caravan toilet cassette, such as float mechanisms and magnets, can only be repaired by touch 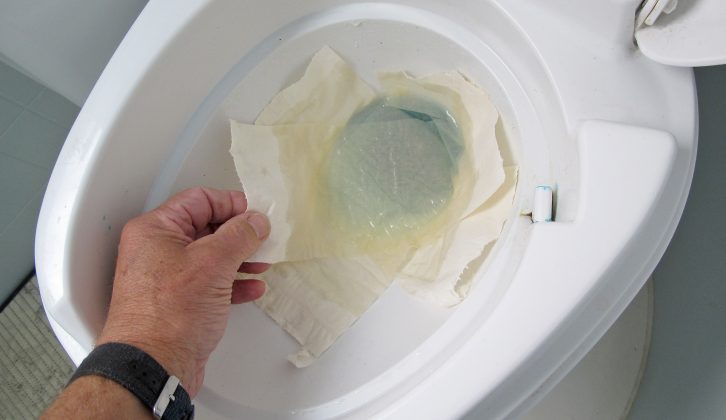 It might seem unthinkable now, but my first caravan had a ‘bucket and chuck it’ toilet. These primitive thrones used a tall plastic bucket with a seat. When it was time to empty it, a lid replaced the seat to prevent any spillage. These rudimentary products had no form of flush and their contents were in view until the bucket was emptied.

Thank goodness the Sargent family of Thetford, Michigan, invented a new kind of leisure toilet with a flushing system and a ‘holding tank’ that hid the effluent away. The tank became known as a removable ‘cassette’, and helped contain the odours, too.

After Thetford’s ‘Porta Potti’, the firm developed bench-style built-in versions with removable cassettes, followed by a more space-efficient fixed toilet with a swivelling bowl. Similar designs also came by Dometic, Elsan and Fiamma, and in 2011 Dometic launched its CT3000 with a bowl that features a scratch-resistant ceramic inlay.

Evolution also improved cassettes, and from an early stage they were equipped with a float mechanism and an indicator to warns users of a full tank. There are several moving parts in a cassette, plus ‘O’ rings to prevent leakage, so repairs can be tricky.

For modern portable products the cassette, seat and bowl are one unit, with a removable lower half. In fixed versions, a special bay houses the cassette, with external access for emptying.

Today’s caravan loo designs offer the best in lavatorial luxury, but I wonder how many readers of Practical Caravan also started with that tall plastic bucket!

How to empty the caravan loo

One common error is to remove the cap on an emptying spout and place it near the waste point. It only takes a knock for it to disappear along with the waste, block the drain and infuriate the warden.

Most chemical toilet emptying points are equipped with a water hose, which is useful for dislodging trapped toilet paper from inside a cassette. Never take a cassette to normal waste-water drains with a similar fixed hose.

Many make the mistake of adding water to a cassette then shaking vigorously before emptying it. This seemingly sensible act often damages the float mechanism that operates the tank level gauge. Add water, but remember to swirl it around gently.

If you’ve opened the slider flap to hose the interior and check that it is free from caught paper, you must close the flap before returning the cassette to its housing. If it’s left open, the operating knob won’t align when entering the housing.

These leisure products often look remarkably similar to a normal domestic toilet, but the way they operate is notably different. It’s important to teach your children from an early age how the caravan’s toilet works; to reinforce to them that it’s best not to use too much toilet paper; and always remember to help them to empty its contents by showing how to open the blade, let the contents descend into the cassette below and then close the blade again.

There are dozens of chemical treatments. Many are sold in liquid form, some as crystals. Some liquids are very concentrated, while others are quite the reverse.Their environmental effects are contentious.

It’s common to use more liquid than you need, so Thetford introduced graduated caps to help measure the right amount. Some chemicals can damage the rubber seal of the slider flap, so add it via the spout rather than the bowl.

In recent years, additives have been created for the flush water. Some undoubtedly leave a pleasant shine on the pan, but they’re not as important as cassette content treatments. A few products are formulated for use in both.

One important warning is that some treatments can be damaging to the internal soft furnishings in your caravan, especially carpets. Some dyes are virtually impossible to remove, whereas water-based products are usually easier to shift in case of spillage.

How to look after your loo

The key differences between household and caravan toilets also affect their maintenance. For example, some harsher cleaning products that are designed for use on ceramic toilet pans at home would not be suitable for a plastic loo like these leisure appliances.

Pay careful attention to the care instructions that will have accompanied your toilet. For instance, Thetford recommends using its own-brand ‘Thetford Bathroom Cleaner’ on the plastic surfaces of its products. The spray foam is easy to apply and leaves a shiny finish.

Inevitably a cassette gets coated with various deposits, some of which will harbour odours. Leisure toilet manufacturers sell renovation fluids that can be left in situ for short periods to shift the coatings.

Electric flush mechanisms draw power either from a leisure battery or dry cell batteries that will need replacing. In storage, flush tanks should be emptied (see the specific manufacturer’s handbook for the procedure).

What to do if your caravan loo breaks

Like any mechanical product, leisure toilets occasionally need to be repaired and it’s pleasing to discover that most manufacturers carry an impressive number of spares. Some DIY owners are able to carry out simpler repairs, but on older (particularly pre-2008) cassettes a few tasks are virtually impossible to accomplish by anyone who hasn’t been through service engineer training.

On older types of cassette, the casing cannot be dismantled and this means that the only way to reach certain key internal components is to squeeze your hand through the small aperture in the top and to work completely ‘blind’. Hence to replace a float is hugely difficult.

On courses, open cassettes reveal parts that can’t usually be seen and may be repaired by touch, such as float mechanisms and magnets.

Several cassette components have ‘O’ rings to prevent seepage. Replacements are available, but can be hard to fit. The emptying spout is easier because it detaches from the casing.

The rubberised ring by the opening blade is the ‘lip seal’ and is easy for DIY owners to replace on all types of cassette toilets, although you need to buy the right one for your product.

When fitting a new lip seal, make sure it is fitted the correct way up and get hold of a tin of Thetford ‘Seal Lubricant’.

A great benefit of the latest cassettes is that they are now designed with a large section that can be removed from the top. This can be hard to unscrew, due to its tight fit, but you can use a slider plate for leverage.

Removing the top makes it simple to reach hitherto hidden components. You can check a float for damage, or replace an assembly easily, but do make sure that you align the top before refitting.

The latest Dometic product, shown in our penultimate photo, has similar innovations to the modern Thetford cassette, and this alternative model has been fitted in some recent Lunar caravans.

Top tip: when you’ve got to go, use the ‘lotus flower’ method

Some people only permit occupants to pee in the caravan loo, sending them off to the washroom for anything more. On a dark and stormy night this policy seems a bit harsh! Instead, teach everyone how to use the caravan toilet, ideally using this ‘lotus flower’ strategy for dealing with ‘solids’.

Before taking a seat, begin by making sure that the flap is closed and flush a small amount of water into the pan. Then carefully place a few pieces of toilet paper to float on the surface like flower petals, positioned to achieve brief contact with the pan. Now take a seat for your performance.

When done, open the blade and the solids will drop unhindered into the tank below, with the paper enclosing them with gift-wrapping panache. The result? No marks on the pan or, more importantly, the blade or its sealing ring. It sound odd, but it really does work! Options for monitoring caravan electricity use